Dr. Maya J. Lo Bello is Adjunct Professor at ELTE TÓK’s Department of Foreign Languages and Literature. She completed her PhD in Modern Hungarian Language and Literature at ELTE BTK; her research focuses on the role played by assimilation in Miksa Fenyő’s career in both the modern literature movement of Nyugat [›West‹] and the industrialization of Hungary’s economy via his position at the Hungarian Industrialists’ Association, GyOSz. Her latest study, Chasing Impressions: A Comparative Cultural Analysis of Impressionistic Criticism in Hungary, was published in 2019 by the University of Pennsylvania’s journal, Comparative Literature. Studies. Maya Lo Bello translates extensively and is Technical Editor of the journal, Hungarian Cultural Studies. 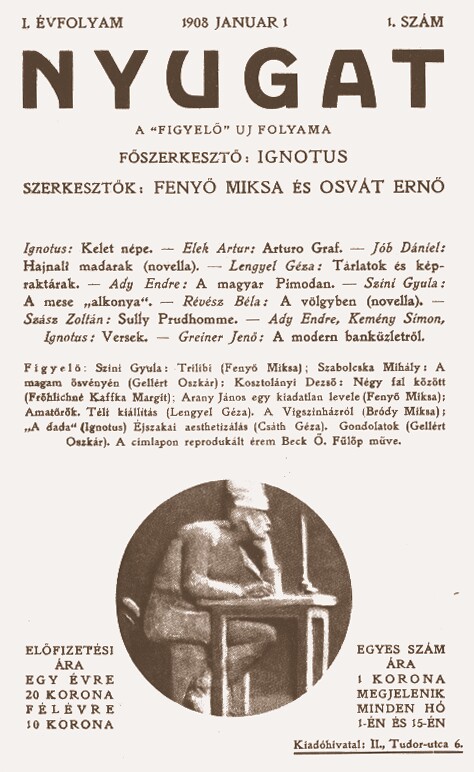 The research object is to examine how advertisements can be used to reconstruct a formation between an industrial, capitalist association and a modern literary journal.

Within the history of modern Hungarian literature, the journal Nyugat was the flagship of modernist literary movements from 1908 to 1941. Mainly perceived as a periodical dedicated to preserving its own l’art pour l’art brand of aestheticism during the period before World War I, my analysis examines Nyugat’s ties to the industrial lobby group, the Hungarian National Industrialists’ Association [GyOSz], through the connections of one of its editors, Miksa Fenyő (1877-1972). First the secretary, then the managing director of GyOSz, Fenyő’s connection to Hungary’s economic elite has largely remained unexplored in Hungarian literary history. By examining the advertisements and notices found in Nyugat, the GyOSz-issued periodical also edited by Fenyő, Magyar Gyáripar [Hungarian Factory Industry], and a few other prominent periodicals from the period, I interpret these textual traces as a type of marginalia that appear inconsequential, yet still allow a periodical to shift, alter and change its profile quickly enough to adapt to the tumultuous historical and socio-economic pressures that characterized the last two decades of the Austro-Hungarian Empire. By reimagining this form of marginalia as a »bookend” that subsequently positions a periodical within a socio-economic context, I draw upon Anthony Giddens’ theory of disembeddedness,[1] Raymond Williams’ concept of cultural formations[2] and Jerrold Spiegel’s description of a network of means[3]  to demonstrate how Nyugat’s editors maintained a fine balance between capitalism and high culture in order to attain artistic autonomy.